1994 was the birth of our democracy and a time of significant growth in our valley. It soon became apparent that there was a demand for an excellent, world-class, English-medium school in the valley. Three families came together to make this dream a reality. If their imagination got us this far, just imagine what we can achieve in the next 25 years.

The concept of a local English-medium independent school in the Berg River Valley moved from the realms of fantasy to a realistic possibility. The Huxter, Friedman and Rands families devoted themselves tirelessly to making it happen; Graham Beck, the owner of the neighbouring farm, Bellingham, generously agreed to donate 10 hectares of an undeveloped corner of his land and the Bridge House School dream became a reality.

By the second half of 1994, the net was cast as wide as possible for pupils and staff, and the financial and constitutional options were carefully evaluated. Lloyd Smuts was appointed Head.

Rezoning applications brought the inevitable delays and frustrations, and finding alternative premises was no easy task, but the committee was undaunted. On 19 January 1995, the 54 pupils who would start the year moved into an unused state school building in Simondium.

In 1997, Allan Graham was appointed Head. Numbers grew significantly, and it was with great jubilation that the Board was able to announce on 25 April 1997 that the application for rezoning of the proposed premises near the Berg River bridge had been approved. For the youngsters present on the chilly evening of 13 October 1997, as the ground was broken at the Sod-turning Ceremony, the significance of the event was probably lost for the parents – and more so the teachers – it was an occasion of excited celebration and anticipation, and who can say what emotions must have passed through the minds of the Board, notably the ‘Founding Three’.

In mid-1998 the school moved to the spacious new campus and in 1999 as if to symbolise the steady progress towards offering a comprehensive range of the best facilities, the swimming pool, the shallow pool for beginners and the tennis courts were added, followed shortly after that by the indoor sports centre. Another major development late in 1998 was the appointment of Chris Storey as Head of the Prep School.

Allan Graham retired as Head at the end of 2002, and Anne van Zyl was appointed in his place. The Barnyard Theatre (now the Theatre @ Bridge House) was built and became operational in 2003. The new College block with seven new classrooms, administrative offices and a College staffroom were added. There was great excitement when the boarders moved into the first new Boarding House in the third term of 2004, and in the third term of 2008, the second Boarding House was completed enabling the number of boarders to be doubled. An extra wing of classrooms in the College came into use at the start of 2009.

Before he passed away, Graham Beck donated an additional 18 hectares of land and Bridge House now owns 28 hectares of land in the most beautiful valley in the world. The Renaissance Centre, housing six new classrooms and the ‘Learning Commons’, was completed in November 2013. The ‘Learning Commons’ is a magnificent space designed to promote and enable progressive and engaged critical thinking in a collaborative learning hub where pupils can develop essential learning and professional skills.

An additional Boarding House (Huguenot House) was also completed at the end of 2013, providing space for another 45 boarders. Initially, this boarding house was occupied by both boys and girls until the addition of Erica House in 2017 provided for the split into boys in Huguenot and girls in Erica.

In the third term of 2015, one Playschool class and all the Pre-primary children moved into a beautiful, newly built facility with spacious classrooms, wide verandahs and a playground full of fantastic equipment. The Pre-Primary facility is a separate on-campus facility situated close to the Prep School itself. The classrooms previously occupied by the Pre-Primary were refurbished, and the Grade 1s and 2s moved into these classrooms.

The College Maths and Science Centre and a fourth boarding House (Erica House) for Junior Girl Borders was built in record time in the second half of 2016 and came on stream in January 2017. The new laboratories in the Science and Maths Centre were an especially welcome addition for the Life Sciences (Biology) and Science classes. The old labs were completely refurbished and were taken over by the Commerce Department.

2016, the 21st year of Bridge House, was celebrated in style with several festivities during the year.

In the second term of 2016, the world-class, water-based Astroturf was declared open by Founder, Tim Rands. This was a particularly emotional occasion and fondly remembered because Tim passed away shortly after this occasion.

On a very misty 12th day of April 2019, the entire school gathered with parents, staff, and Board and Trust members to honour Tim Rands at the opening of the Tim Rands Oval. Tim passed away in 2016, and he was represented at this occasion by his wife, Linda, his daughter Abbey, and his son, Svend. The magnificent new scoreboard on the field was donated by Boekenhoutskloof in Tim’s honour. The scoreboard was built by Bridge House staff members, Mr Christo Roos (Snr) and Mr Christo Roos (Jnr). History was made when Abbey placed the bails on the wickets, and Svend bowled the first ball to the U/11 cricket captain, Harry Morgan. A ceremonial over was bowled with past pupils, Siobhan Baatjes and Nicole la Fleur, both provincial cricketers, bowling to U/13 Captain Reuben Sendzul and U/15 Captain Liam Daniels. Our Over 50s SA cricket player, Mr Riaan van der Rheede, bowled to U/19 Captain Lloyd Phillips. Finn Gretschel was the wicketkeeper. It was a historic and memorable occasion and a celebration of all those who contributed in some way to establishing this new field.

In December 2019, Mike Russell (Head for 10 years) and Rory Malcolm (Deputy Head of School for 23 years) retired.  Previous Head of Reddam Constantia, David Clark, was rung in as the new Head on 9 January 2020 at the start of the school’s 25th Birthday Year.

In June 2020, in a most generous gesture from a locally based family Trust, whose members have a long association with the school but who wish to remain anonymous, the debt owing on the land and buildings was assumed by them. The previous owners of the 28 hectares of land and buildings of the school, the Bridge House Educational Foundation Trust, was dissolved.

Bridge House School (the not-for-profit company) will continue to lease the property from the new Trust and will operate as it always has but with the important benefit that it does not have to solve for the previous debt burden. We are extremely grateful to the Trust for this investment and for their confidence in the school. 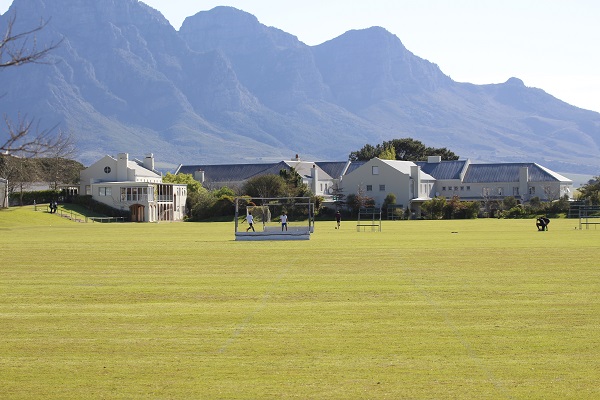